Place of the Eagles

The most spectacular attraction for ornithologists and amateur birders is without doubt the spring and autumn migrations of golden eagles and other raptors. The birds ride the strong updrafts generated by prevailing westerly winds when they slam against the front ranges of the Rocky Mountains.

One particular site is the focal point for both birds and birders. The modestly sized mountain, easily accessible from Crowsnest Pass, is the southernmost point of a chain of mountain ranges continuing uninterrupted all the way to the Yukon.

Each spring, eagles, hawks and other raptor species converge on this single hill from wintering ranges dispersed across the American West. Here, they soar in tight circles to gain altitude and then glide northwards at astonishing speeds. In fall, the same birds, and their young of the year, return to the hill from where they fan out to their cold-season hunting territories.

This hill and its importance to migrating birds was familiar to native peoples long before contact with Europeans. For thousands of years, natives mined chert from the top of this mountain and traded the translucent rock to tool and weapon makers across the continent. They could not have helped but observe the avian migrants. Ancestors of the Blackfoot named the ridge Piistaistakis--Place of the Eagles. 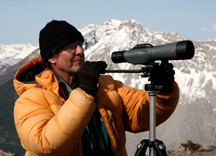 With the introduction of iron to native cultures, demand for chert disappeared and along with it all human awareness of the high-altitude eagle movements. It was only in 1992 that the great golden eagle migration was rediscovered by scientists, aided by serious amateur bird enthusiasts. Since then, the seasonal migrations have been meticulously monitored. More than 100,000 golden eagle movements have been recorded.

The research suggests that rates of reproduction in the eagles' far-northern breeding ranges fluctuate in harmony with the population booms and busts of their preferred prey, the snowshoe hare. When hare populations are at the bottoms of their cycles, male eagles cannot provide sufficient fresh meat to trigger their mate's production of eggs.

of 200 golden eagles are usual. The southbound fall migration peaks in mid-October.

Hiking boots and good physical condition are required to reach the Piiastaistakis observation site. Drive the paved road from Highway 3 in Crowsnest Pass (GPS N49 35.869 W114 24.092 ) towards the Frank Slide Interpretation Centre. Where the road bends sharply to the right, continue straight across the cattle guard. Keep left at all branches and follow the rough dirt road to its end at an open meadow (GPS N49 36.238W114 21.683 ). Then hike eastward and upward along the well-trodden trail to the ruin of a coal mine. From there, follow the path to the hilltop (GPS N49 36.595 W114 21.158). 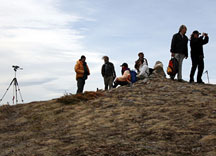 A worthwhile extension is the short walk northward along the ridgeline to the native chert quarries, now unfortunately straddled by a major power transmission line. Look for pink chert fragments amid the limestone rubble left by ancient miners.