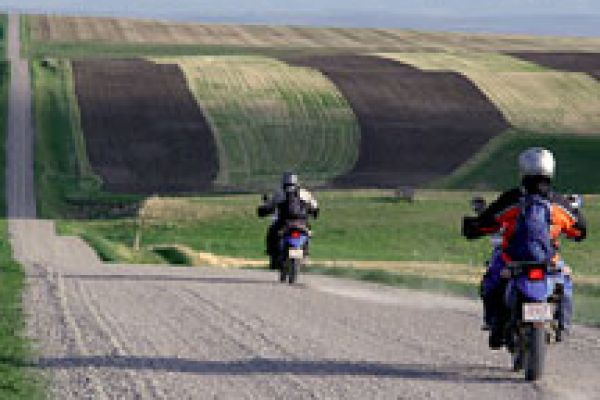 Get your Motor Running

The ups, downs, twists and turns of Alberta SouthWest's highways and byways seem made for two-wheel power. From April through September, heavy cruisers parade Highway 22 along the front ranges between Calgary and Crowsnest Pass. Another favourite of the big-bore set is Highway 6, from Pincher Creek to Waterton Lakes National Park (and beyond to Montana's Going-to- the-Sun Highway that crosses the Continental Divide through Glacier National Park).

For those with the right balance of weight, power, and tire grip, there are even more satisfying routes, travelled rarely by motorcyclists and only infrequently by cars and trucks.

Secondary highways (paved) are suitable for any motorcycle. Follow Secondary Highway 800, for example, to Glenwood for a well-packed cone at the ice cream parlour on Main Street. Or loop around the Oldman River Reservoir on Secondary Highways 785 and 510 -- a wide-open road little known to visiting bikers but well-used by local riders.

The Long and Windy Road

The winds that power out of the Rockies, across the foothills and into the flatlands are a particular hazard in our region. Sudden gusts, or surprise calms, upset a motorcyclist's equilibrium and, if not managed correctly, can be catastrophic. 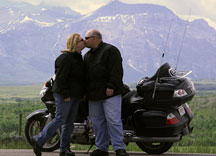 Crosswinds too-frequently push semi-trailers into the ditch along north-south highways. It would appear logical that a motorcycle would be even more vulnerable to upset. Fortunately, the opposite is true. A skilled rider can counteract the effect of crosswinds, not by leaning his body, but by subtly turning the front wheel in the same direction that the wind is blowing.

The region's best authority on riding in high winds is Myles Lang, a veteran motorcycle racer and owner of Rocky Mountain Yamaha in Pincher Creek. "There is no wind strong enough to blow over a motorcycle," he declares.

"The defense against wind is counter-steering," he explains. "If the wind strikes from your right, the correct reaction is to press lightly on the right handlebar grip, as though you are starting a right-hand turn."

The result is that the bike, but not the rider, leans rightward, into the wind, with the front wheel held steadily in a slight left turn. The rider remains upright, ready to adjust the subtle counter-steering pressure in response to any change in wind strength or direction.

The worst thing to do is to succumb to instinct and try to lean both the bike and the body sideways against the wind .Mass and motion make it impossible for the rider to lean the bike by shifting his weight off-centre into the wind. The bike will simply stay upright while tracking towards the ditch, with the rider loosing control. Counter-steering is the only way to set the machine into a balanced lean.